A native of Kingston Ontario, Steve Holy has played double bass professionally since 1986. Since then he has lived in Montreal, Toronto & Vancouver, playing with many of Canada’s finest jazz musicians. Known for his deep tone, strong groove and supportive approach, Steve has been featured on over 15 CDs and is the recipient of 2 Canada Council Grants. He is currently playing regularly with Kristian Braathen and Miles Black. He is also a bookseller and skilled woodworker.

Bernie Arai’s musical career as a performer, educator, composer and recording artist spans styles through jazz, improvised music, traditional Japanese, and electronic and computer music. On drum set, percussion and electronics, he works with some of Canada’s most accomplished musicians. Born, raised and based in Vancouver, Bernie has performed across the country with various ensembles, and has also toured across the United States, Japan and Europe. A graduate of Capilano University Jazz Studies program, Bernie fronts many diverse ensembles. He remains in demand as an accompanist and band member for many legendary musicians from across Canada and around the world, appearing in concert at numerous music festivals worldwide. A dedicated and experienced educator, Bernie continues to teach based in Vancouver, including work as an instructor at the Vancouver Community College School of Music.

Since the age of sixteen, Sharon Minemoto has been performing to audiences around the world. Her trio and quintet have each released one CD as well as several shows for CBC Radio and her quartet’s recent recording, “Safe Travels”, took the band on a Canadian tour in February and March of 2018. In addition to her own ensembles, she has performed in groups led by Jill Townsend, Cory Weeds, John Korsrud, James Danderfer, Laura Crema, Alan Matheson, Mike Allen and the Vancouver Symphony Orchestra. Sharon has been on faculty at Vancouver Community College in the school of music since 2000.  She is the recipient of two Canada Council for the Arts grants and one BC Arts Council Grant.   In 2019, CBC Radio in Vancouver selected one of Sharon’s compositions as the new theme song for their weekly jazz program, “Hot Air”.

Dave Say is a Canadian jazz saxophonist and composer renowned for his soulful interpretations, powerhouse sound, tasteful inventiveness, and adventurous improvisations. Dave has headlined at every major venue in western Canada. He is a favourite at the Vancouver International Jazz Festival where he presents his contemporary jazz original compositions to a riveted audience each year. Dave’s versatility makes him a first-call musician on the west coast for all styles of jazz, funk, R&B and as part of big bands and larger ensembles. Inspired by the likes of Coltrane, Shorter, Rollins and Getz, Say’s sound is firmly his own having been cultivated over his 35-year career. Whether playing straight-ahead swinging standards, or venturing into uncharted territory with his soulful and haunting original music, Dave’s dedicated following of fans and musician colleagues certainly have something to say about Say! 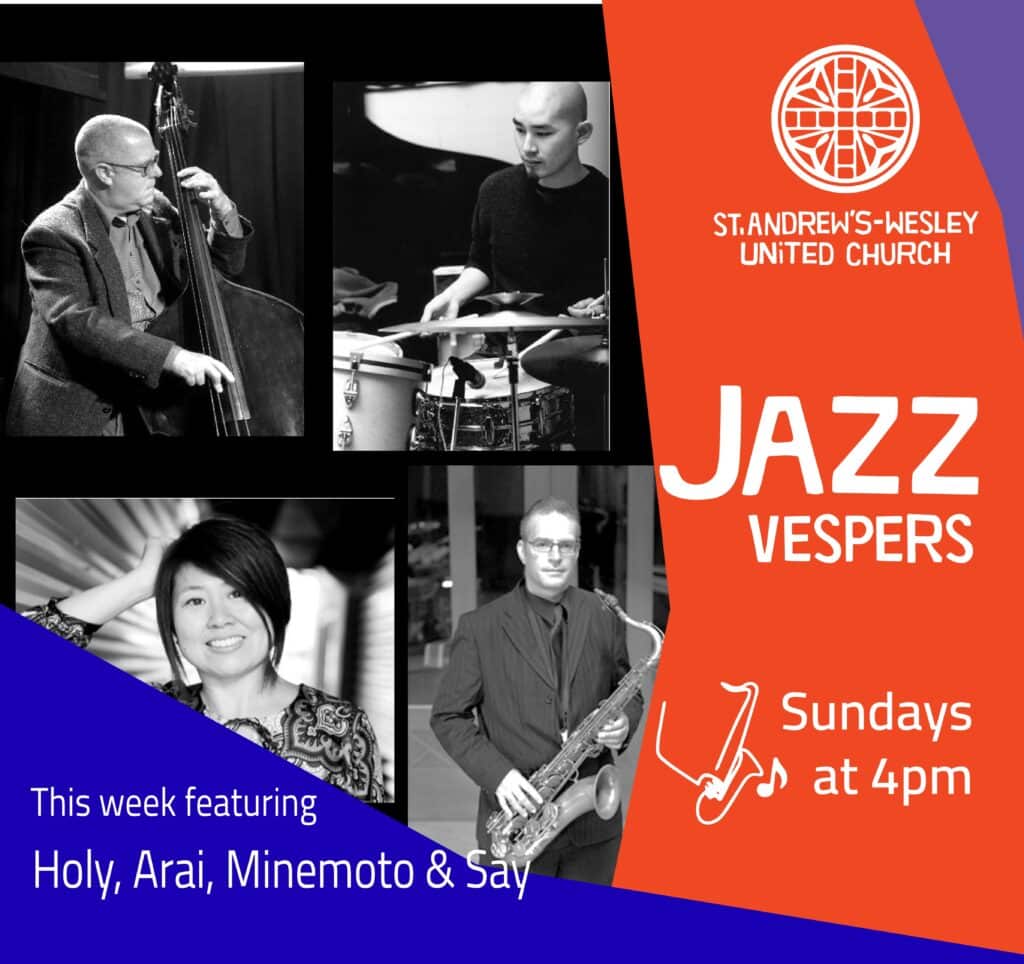 Celebrating the gift and presence of the furry, feathery, finned and scaly creatures in our lives. We gather to give thanks and to offer a blessing.

This October we’ll turn our attention to a practice that’s at the heart of our faith, yet so often I hear, “But I don’t know how to pray.” California Hall of Fame author, Anne Lamott, brings her disarming humour and honesty to the three essential prayers we all instinctively know: Help! Thanks! Wow!

Get Your Tickets!
View All Events

Our Place
In the World

St. Andrew’s-Wesley respectfully acknowledges that we gather on the unceded lands of the xʷməθkwəy̓əm (Musqueam), Skwxwú7mesh (Squamish), and Səl̓ílwətaɬ (Tsleil-Waututh) Nations. For thousands of years, First Nations people have walked on this land and their relationship with the land is at the centre of their lives and spirituality. As a church, and settlers on these shores, we have a life-long responsibility to unlearn our misunderstandings of history, territory, and identity through critical reflection, acknowledgement, and listening.